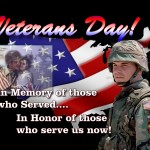 Veterans Day. On the 11th hour of the 11th day of the 11th month of 1918, an armistice, or temporary cessation of hostilities, was declared between the Allied nations and Germany in the First World War. then known as The Great War. Commemorated as “Armistice Day,” beginning the following year, November 11th became a legal federal holiday in the United States in 1938. After World War 2  and the Korean War, Armistice Day became known as Veterans Day, a holiday dedicated to all American Veterans. The difference between Veterans Day and Memorial Day is that Memorial Day is a day for remembering and honoring military personnel who died in the service of their country, particularly those who died as a result of battle or wounds sustained in battle. Veterans Day is to honor all veterans, past and present, who have served their country honorably, whether they have been in battle or not.   ” COURAGE- Bravery doesn’t mean you aren’t scared, it means you go anyway”